Hi everyone - some items below for you to consider at the next committee meeting in July.
1.   Internal League Rules - I attach proposed league rules. You will recall that at the AGM the proposed changes were agreed apart from an amendment proposed by John Harding in relation to dead jacks. It was agreed that in all matches that dead jacks are placed on the T and the end is continued. This has always been the rule in the Men's Triples Sets but not in the other games. This is now clarified under 'Match Playing Time' and does not need now to be mentioned under Sets Triples as it was previously. All the Leagues are therefore now playing under the same rule. Can the committee please agree the rules and they can then be sent out with the newsletter to all members. I am happy to get the rules laminated and displayed in the Bowls Hall if you want me to do this - please let me know.
2.   I attach the Winter Leagues guidance sheet for the new season on the basis that there are no changes. Even if one team drops out say in the Men's Triples on a Monday it won't affect the start or finishing date.
3.  New season preparation - as mentioned in my report for the AGM the committee really needs to appoint an Internal Leagues Secretary but failing this the committee as a whole will need to be in charge of the leagues and probably specifically one person to deal with the pre-season work. I am happy to still help out by setting up the leagues, once the teams have been sorted and to issue score cards and maintain the league tables once the leagues are underway.
Some guidance as follows:
a  - email to Team Orgainiser's on the 1st August asking them to confirm that their team will be entering a team in the new season. Also details of the team. Deadline date to be set as 29th August.
b - reminder to be sent to Team Organiser's on 15th August if they haven't replied . Deadline date again to be emphasized as 29th August.
c - league timetable, team sheets etc. to be sent out during the week commencing 5th September. I am happy to do this once I have received the relevant details. I have actually already set up the timetable on the basis that there will be no changes!
I will let someone on the committee have details of the Team Organiser's when you have decided on the course of action.
​ 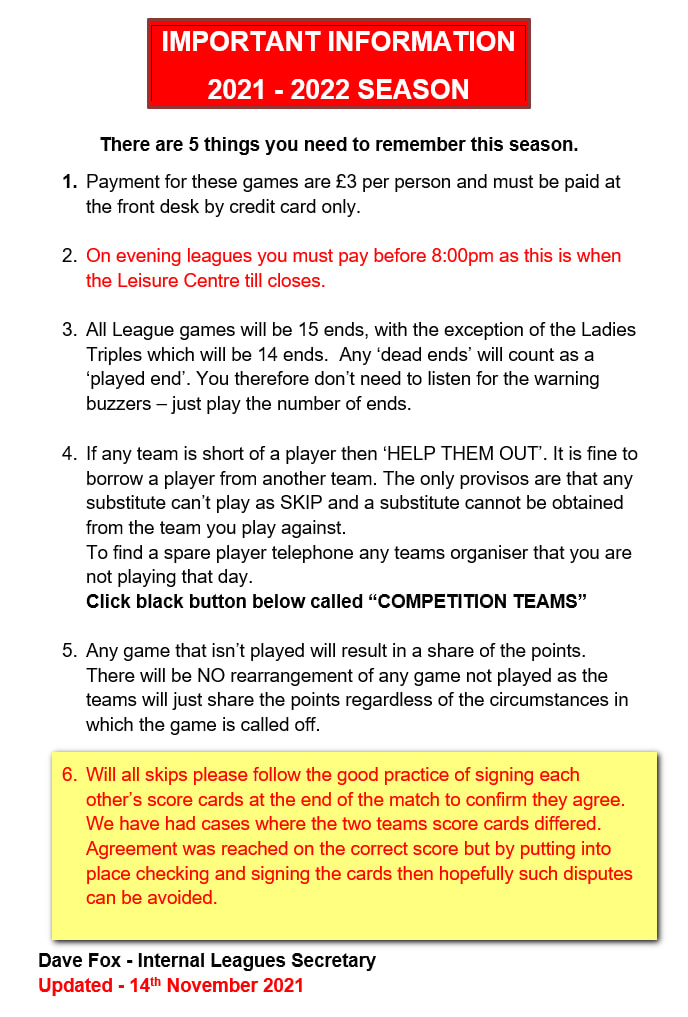